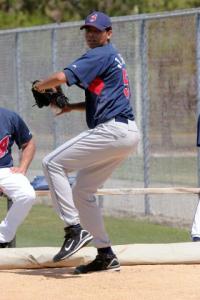 One of the biggest question marks that the Cleveland Indians have on their 25 man roster, is the role of Justin Masterson. The Indians acquired the starter/reliever hybrid from the Boston Red Sox in last summer’s un-popular Victor Martinez trade. At the time it was unclear where what his role would be in the organization but all the team knew was that they were going to try to stretch him out to be a starter. In 31 total starts, 21 coming this season, Masterson really has not accomplished anything to inspire confidence in his abilities as a starting pitcher. However, due to lack of major league quality depth in the area, he has continued to be trotted out there every 5th day. Well, times-are-changing in Wahoo Land and it might be time for Manny Acta and Mark Shapiro to re-evaluate where they use Masterson. He proved in his time in Boston to be a capable relief pitcher, good in the long-relief role as well as in shorter stints. His funky delivery and hard slider project well to bullpen work. I know I am not the only one who follows the Tribe that would love to see Masterson sent to fortify the bullpen in order to allow the young promising arms of Jeanmar Gomez, Hector Rondon and even Carlos Carrasco to take over the starting rotation for the remainder of this season.

If Masterson’s record of 3-10 is not the biggest red-flag. You can’t blame the pitcher on a struggling team for his win-loss record completely, but if you look at just about everything else, you see he is not really taking to this starting thing all to well. His ERA of 5.55 is very high, and while he leads the team with 97 strike outs, well that is no real accomplishment because the Indians do not have any other strikeout oriented starting pitchers. Masterson has notched 123.1 innings pitched this season in his 21 starts, which is an average of just under 6 innings per game. That would be great, except for the fact that he is giving up 6 runs a game. However, if you take his K/BB rate of 1.83 this season is pretty solid, and he is averaging 7.1 K/9 innings. With his ability to strike guys out, especially right handed batters, why not make the switch to the pen. At 25 years old and in his 4th season, it seems like it would be beneficial to him for the Indians to pick a roll for him and stick with it, lets hope they pick the bullpen. I am not really a advanced stats expert, so I am not going to try and really dissect a lot of those things, but just purely based off opinion and interpretation of what I see him doing, it makes the most sense for him to be a short-relief man. If the Indians were to try and use him against chunks of opponent lineups with right handed batters late in the games, it would give them a good shut-down late inning option. What has really killed Masterson this year is left handed batters. He can just not get them out. Over and over again it happens. 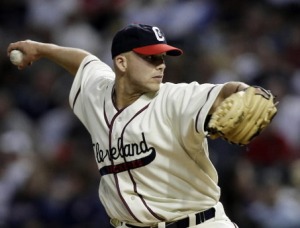 Honestly, just about the first thing I do every time I start a dynasty with the Indians in MLB 2K10 is make Masterson a reliever and trade for another starter, and it always works out well. Even the video game is smarter than the Indians. His 6’6″ frame and wild delivery with heavy fastball/sinker/slider combo would really translate well to the Indians bullpen that lacks power by any one who is not named Chris Perez. Bullpens should not be built around sub-par soft tossers like Jensen Lewis, they need upper 90’s guys like Perez, Frank Hermann and Justin Masterson. If the Indians would go to a 7th/8th innings combo of Masterson, Hermann and Raffy Perez for the lefties they would be a solid bridge to Chris Perez. I will leave it up to the smarter people to explain this for the more advanced stats inclined, all I really want to do is open up the discussion about where Masterson should be. Maybe the Indians can let him try and convince them he is a starter the rest of this year, or in Spring Training next year, but I would rather see Rondon, Gomez and Carrasco working the rotation the rest of the way with Tomlin and Carmona. Masterson has had 31 starts to show us his stuff, almost all of them have gone poorly. He is 4-17 as an Indian, out of relief and starting. So unless they want to give him back to Boston, I say let him return to where he had success before out of the ‘pen. Switching J-Mast is definitely an option the Indians should consider, especially with the way this season is headed, in order to get some of the guys from AAA up in the rotation to see how they can potentially help the team moving forward. And hey, if they do move Masterson and he pitches well out of the ‘pen, that gives the team a big positive moving forward as well.