An Eye on the Draft 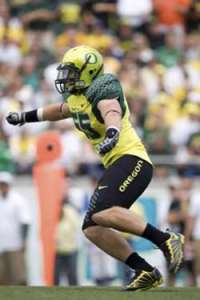 In the past we have been pretty intent on running down a list of potential people the Browns should look to draft in each early round of the NFL’s draft in April. We are going to do things a little different this year, instead of throwing out a long list of guys for each round we’d like to see come to Cleveland, we’ll kind of go through one at a time with shorter posts with a little info on the guy we think would be a good player to bring to the improving Browns. We all know what the Brown’s needs are, playmakers on both sides of the ball, offensive line support for the right side, Wide Receivers and more depth and ability in the front 7. Joe Haden and TJ Ward showed this year that they should be pivotal parts of the Browns secondary in the future, and Matt Roth and Marcus Bernard had good years up front, but the Browns certainly need help there. My focus today is on someone who the Browns could potentially select in the 4th, or maybe the 5th round. He has some ties to the Browns already because of family, and he has just about the best NFL bloodlines you could ask for. Casey Matthews. His father, Clay Matthews Jr, used to play for the Browns, and was one of the better linebackers to ever play football, his uncle is the best offensive lineman to ever play, and his brother Clay the third, is quickly becoming one of the best linebackers in football.

So what makes Casey Matthews special? He is the anchor of the National Championship hopeful Oregon, a former teammate of rookie standout TJ Ward. Oregon is a top 30 defense in college football and he is there leader on and off the field. He brings the same size, speed and aggressiveness to the position that his brother, Clay, brings to the Packers. This season he was named one of the 8 semifinalists for the Lott IMPACT Trophy (defensive IMPACT player of the year) and one of the 15 semifinalists for the Butkus award for best linebacker. In his 4 college seasons he has tallied 228 tackles, 4 interceptions and 9 sacks. He got a career high 72 tackles this season with 3 interceptions and 3 sacks, as well as 3 fumbles recovered. His stats are pretty impressive throughout his college career, and if the Browns are looking to add depth in the middle part of the draft, Casey would be a fairly risk free investment. At worst he could be a average or below average linebacker, he could have the versatility to both play inside and outside. At best, he could be like his dad or his brother and be a dominating force in the middle of the field.

The highlight video I attached shows just a little bit of how good he can be. It also shows quotes from his coach Chip Kelly and others. Coach Kelly says he is the most instinctual player he has ever coached. That is saying a lot about Matthews abilities and knowledge of the game. He came off the bench at middle linebacker as a true freshman in 2007, when he was undersized for a player at his position. He has continued to mature and grow and now is listed at 6’2″ and 235 pounds. To go along with his high tackle numbers and good sack and interception totals, he was disruptive in the running game as well getting 8.5 tackles for loss, and also deflecting 5 passes. He is just one of many potential players the Browns could add in this years draft, and I think he would be a good fit if the Browns stay in the 3-4 or even if they switch to the 4-3.

I’ll be eager to see how he plays in the Title game next week, and I’ll be even more eager to see if the Browns have any interest in drafting him. If they don’t, I think they will be missing out on someone who is going to be a very good player in the next level. His ability and work ethic cannot be ignored, he has a good football brain and even better football bloodlines. The Browns could definitely benefit from Drafting the young Matthews Linebacker, afterall I’m sure he would like to follow in his dad’s footsteps and help make the Browns good again.

1 Response to An Eye on the Draft