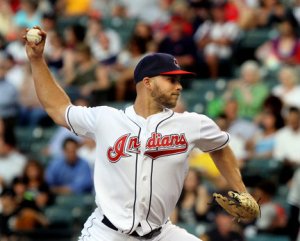 Masterson has been Masterful thus far in the season, leading the Indians early success.

The first Wahoo notes of the 2011 season, finally. What a start to the year it has been! The shock of the year so far is the hot start of your Cleveland Indians. The Tribe sits atop the AL Central and are fresh off of sweeping the Royals out of town. The Tribe made easy work of the 2nd place Royals thanks to some more powerful offense and what is becoming typically good pitching performances.

Let’s delve into the Tribe’s early success a little bit. Pitching,
Pitching, solid offense and more pitching. It has been fun to watch without a doubt. As I have done in the past I’ll pick out a few things I have taken note of, players who have been hot and others who have not.

Easily the top performer of the season so far is a tall skinny right hander that coming into the year had made no big strides forward since entering the Indians rotation. He now needs no introduction, Justin Masterson appears to be fulfilling the massive potential that everyone knew he had. He has been absolutely dominating to start the season, a winner of 5 straight, Masterson is baffling righties and lefties, hammering the strikezone and keeping down the walk totals that killed him all year last season. Masterson seems to have figured it out and stepped up his game, he is leading a surprising charge from Manny Acta and Tim Belchers rotation.

The other big story from the rotation is the early performance of Josh Tomlin. He has won at every level thus far, so why would you expect any less from him now. While I doubt he will dominate all year long, I do think the Indians have their cog in the middle of the rotation, much like Jake Westbrook used to be. 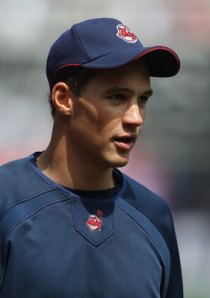 Sizemore's return to the lineup has further sparked the Indians hot start.

Grady is baaaaaack!!!!! What a return from Sizemore. The Tribe desperarately needed him to come back strong. And boy has he, if he stays healthy and keeps this up it will keep the Indians offense charged up all year long. He has smashed 4 homers in 10 games back and is just crushing the baseball. When he is on he is still one of the best hitters in baseball.

What hole at 3rd base? Jack Hannahan has been quite the early season revelation. His defense has been incredible and his offense has been a shocker. He hit 2 bombs last night and is making me not dream too hard about watching Lonnie Chisenhall coming up to the bigs. Not to mention the Orlando Cabrera boost. I thought that was a bad move when we made it but it is certainly paying off early on in the season.

Don’t worry about the early struggles of Carlos Santana. He will figure it out.
I don’t know if I should let myself believe it or not, but Hafner has looked good. Mighty good. Maybe not the Pronk of old, but he is still a threat, and the way he is hitting it is making it easier for the rest of the team. Hafner is batting .342 and the baseball is looking like a beach ball to him. He is showing the patience and swing that made him so dangerous for those season before he fell to injury.

That’s more or less the big few observations for the first handful of games. I’ll be back next week with some more Wahoo notes. Go Tribe!